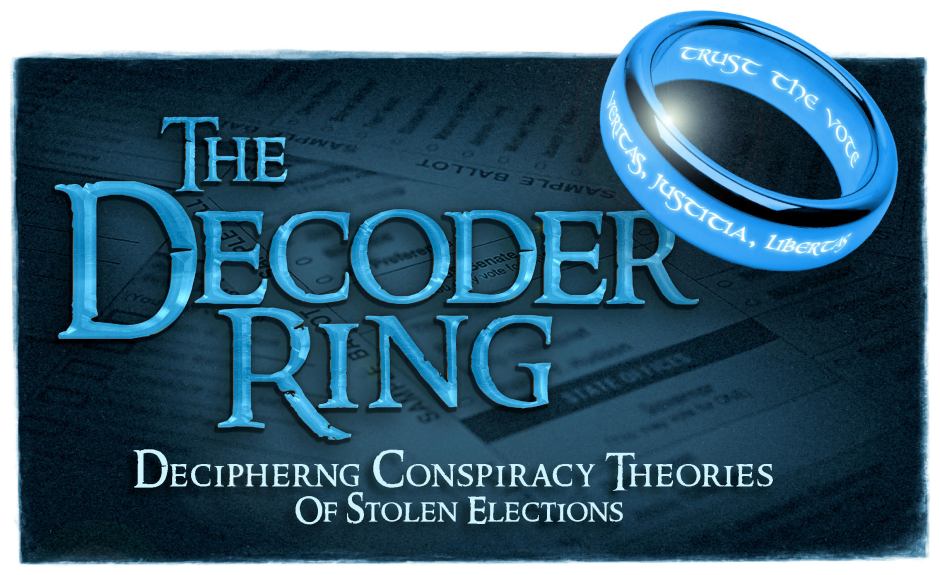 Weeks after a normal election there are still 100s of thousands of people, or more, tuning into a variety of theories about how the presidential election was “stolen.”  Among these are several theories that center on the software in voting systems. These several theories exist in a perpetual social media mix-master that continues to generate new combinations of old and new zombie memes about things like “Evil Voting Software,” and “Rampant Election Fraud.”

No, at least you should not worry about Evil Voting Software, but you might well be concerned about the corrosive effect these theories can have on rational  politics.

As I said in my preamble to this series, every one of these theories can be easily deciphered and discarded, if you learn a few new facts about how U.S. elections are actually run, and then apply your common sense.

It’s like a secret decoder ring because your common sense is always at hand.

In this mini-series, “The Decoder Ring,” I cover three basic families of theories about how election technology was supposedly used to steal the 2020 presidential election. Each centers on the evil-doers, whether Crooked Election Officials, or Evil Software, or Hackers from <fill-in-the-blank> (e.g., China, Iran, Russia, Saudi Arabia, etc.).

In this Part 1, we look at the common core of the first family of theories: (very rare) crooked election officials steal the election using voting system software that has features that were created by bad people to enable bad election officials (EOs) to steal elections.

In each of the several varying stories, you can imagine in your mind’s-eye a rogue EO bent over a keyboard using some voting system software to commit a serious felony by falsifying election results, using arcane techniques for shifting votes from Biden to Trump, or creating Biden votes, while leaving all the other contests “un-stolen,” and (of course) without leaving a trace.

[Ed Note: We have to observe in our experience we cannot recall an incident of such a rogue election official, but let’s suppose one for the point of explanation.]

There is an essential basic feature of all these stories:

They are about outright election fraud committed by a conspiracy of election officials spanning many counties and states.

Secondarily, the stories are also about the supposed conspirators’ methods: software used to implement the conspiracy.

You might not recognize this basic feature, given how much of the buzz is about the technology, so let’s be super clear:

Technology is the how of imagined fraud, but the what is, in fact, a claimed conspiracy.

Here is all you need to know about why these theories are very, very unlikely.

Election officials can steal elections just fine without fancy technology, more safely. In the 19th century such fraud was rampant, which is in part why the first mechanical voting machines were invented (!) It was possible then and possible now, though now we have many more procedural controls on the process of counting ballots… those controls being another legacy of 19th century “machine” politics, along with the first lever-machines for counting ballots.

If you are really concerned about electoral fraud conspiracies, you should be thinking about the most sensible way for the conspirators to do their evil deeds, do them effectively, and not get caught. I’ll offer you two ways; choose one:

I’ll leave it to your common sense, but for me, it’s Door Number 2.

Door Number 1 is like using a complete set of professional construction tools to disassemble a complicated locked box, when the box is yours; you have the keys; and you can open the dang box!

It’s that simple, if your common sense is like mine, like when you realize that to enter the big complicated magic door, you don’t need major arcana, you actually just need to say something ordinary: “Say, ‘friend’ and enter.”

Before ending Part 1, I want to come back to the “Where there’s smoke, there’s fire” idea that we began with in my earlier post: if it is really that simple (i.e., if election officials do not need complicated tools to steal an election), why is there so much talk going on, continuing for many weeks?

Answer: Think about the conspiracy theorists and their motivations.  Sure, they want the election to have been stolen; they need a story about how; they want to tell the stories and get attention; they need some “sizzle” in the story, some arcana, some cloak and dagger.  And, oh yes, they want (um, “need”) the clicks and viewers.

Suppose they made the same accusations of conspiracy, but with a simpler story of 19th century methods. No sizzle! And it would be too easy for many people to disbelieve. However, a story with 21st century methods, cloak-and-dagger intrigue, and a lot of moving high technology moving parts, now that is a much more cool story.

Regardless of the methods supposed, if that three-part statement seems improbable to you, then please, please tune out all the wacky theories about the How, because you don’t really believe in the What of the theory in the first place.

On the other hand, if you think those three points could be real, then don’t fuss about the 21st century details of the How —and you might suppose that some 19th century techniques were at work too —but instead focus on convincing everybody else of the What rather than the supposed How.

A real conspiracy of election officials should be something that can, if real, be rooted out, and without a bunch of blather about election techno mumbo-jumbo, which I will discuss more about in Part 2.