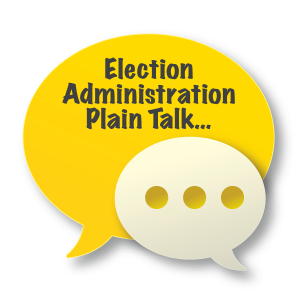 Suddenly many people are asking:

What’s an election audit? How is it different from a recount?

They’re asking with both interest and confusion, probably because of the just-completed ballot-counting activity in Georgia in November 2020. Of course, there are many explainers about audits and recounts, including this brief if dry one from Verified Voting or the longer more detailed and nuanced articles we posted last week here and here with an eye on Georgia and other prospective recount states.

But for some really plain talk, it’s not so complicated. We can forget about the Georgia situation[1] and simply read on for some plain language about the what, how, and why of audits vs. recounts.

First, one key point: this is about the concepts, explained in basic terms, without going into every last detail about the procedures to actually perform and audit or a recount. So, for example, a really important part of an audit is ensuring that every paper ballot is authentic, and that its “chain of custody” can be verified through documentation. That task can turn into a whole related process of its own, called a “compliance audit.” Those procedures and details are essential to election operations, but not needed to explain the basic concepts. In other words, we’re talking about a ballot audit, not an audit of everything that happened in an election.

We’re talking about a ballot audit, not an audit of everything that happened in an election.  A ballot audit is where people manually count a subset of all the ballots[2], in order to cross-check the work of the computers that scanned and counted ballots. To perform a ballot audit, we must have paper records of the voter’s choices, and voters had to have an opportunity to verify the paper records. And we’re going to compare those to results reported by the voting system. Why? Because…

All the technology is great for quickly processing many ballots with dozens of different counts needed. But it’s just hardware that can have glitches, and software that definitely has bugs, so we can’t blindly assume they work right every time. So in addition to the rapid machine count, our hard working election officials in a few states and counties do a cross-check: they take a random sample of ballots, count them by hand, and compare their hand-count vote tallies to the tallies created by the computers. Most of the time variances are small — and there are virtually always variances — but with the right sample size (let’s skip a bunch details of the statistics mathematics, and just say “right-sized”), election officials can be highly confident that the machine counted election results are correct.

Why the emphasis on election results? Because that’s what counts: who won. Getting an exactly correct count of every vote from every ballot is not the point – and often, it’s not even possible. There are always a few ballots with marks that might or might not be votes, depending on how a human reviewer sees them, and depending how they interpret state election law and local guidance on it.

And since we never trust computers to decide election results, then ballot audits are essential for every election. In an ideal world, that’s what every state would do. But currently, post-election ballot audits are required in only some states. However, in those states where they are required, an audit is done for every election, regardless of whether there was a “close” contest or one with a “small” margin of victory.

In a future when routine audits are done everywhere in the US, then we can trust that national election results are correct, even if the election tech malfunctioned — whether by software bugs, hardware glitches, foreign hackers, or election officials’ “operator errors” of the counting machinery.

Unlike audits, a re-count happens only in some elections.

A re-count happens when an individual contest has election results that are “close” as defined by the state election law. Every state has differences: a different definition of “close;” different triggers for when a re-count is required; different rules for when a re-count may be done; different definitions of “automatic” and other types of recount, and so on. Every state also has different rules about how re-counts are performed (and some states like Georgia forbid hand-counting in re-counts, except in special circumstances).

Besides the difference of “every election” for audits and “only when permitted” for re-counts, here are key differences between recount and audit. First, the how:

That difference is significant. Except in very very close contests, the sample size for an audit can be a very small subset of the ballots – perhaps only in the hundreds, for example.[3] By contrast, in re-counts, all ballots must be re-counted.

I think it gets confusing because in both audits and recounts, ballots that were counted before, are being counted again. But the meaning and purpose of these additional counts are quite different.

That sounds important, right? “Every”? That’s why the whole country is moving to modern paper-ballot processes and technology, plus audits. The progress is slow, but when we get there, we will be protected from TWO very important problems:

Since #2 is so corrosive that it can undermine democracy, and given our experience in 2020… let’s pick up the pace on getting to nationwide ballot audits!

[1]     The Georgia situation was confusing and not typical of either audits or recounts. It wasn’t a recount (although it involved hand counting) in the sense of Georgia state election law (and despite the Secretary of State’s claim that it was a re-canvass, recount, and audit all in one). And it wasn’t a typical audit either, because election officials ended up hand-counting 100% of paper ballots, instead of just a sample.

[2]     To be very specific about “ballot” – this means a paper record of the voter’s intent, that the voter had the opportunity to verify; that is, check for any mistakes in capturing their intent. For a hand-marked ballot, that’s obvious, but for voting-machine-printed ballots it’s essential that the voter have the chance to examine it for mistakes, before casting it.

[3]     In the very close Georgia 2020 presidential contest, given the margins, counties would have needed to review about 30% of all ballots, for a total of 1.5 million ballots. Because the required batch of ballots would have been so large, instead of hunting down millions of specific ballots from many storage boxes, the state chose instead to simply hand-tally all the ballots. But that was unusual. In most elections, there is no one contest with such razor thin margins, and the sample size can be quite small.  You can read more about that in this article from last week.