“Why is Pennsylvania Taking So Long?” – Our Neighborhood Chat 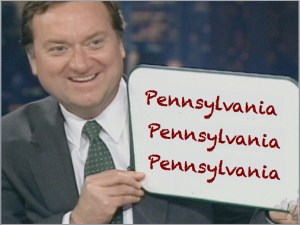 In Honor of the Late Tim Russert of NBC

As the undisputed top election geek of Menlo Park’s Willows neighborhood (very little competition for the title), I seem to be the “go-to” person for answers about mysterious election stuff. The last couple of nights of socially distanced back yard drinking and noshing have generated a lot of questions.

Question Number One, I have summed up in the following dialog: MLB is a composite of my neighbors, and EJS is, of course, myself.

MLB: Why is Pennsylvania (PA) taking so long to count the ballots?

EJS: It’s actually going super quick, zero to 95+% in less than 4 days. I think what you mean is: why isn’t it done yet?

MLB: Well, yes, I want to know why we don’t have the result by now.

EJS: A late start, a ton more than the usual volume, and there is a COVID factor too.

MLB: You said processing, not counting.

EJS: Yes. It takes a couple of seconds to count most ballots, but it takes many minutes for a group of people to go through the process of checking the envelope, matching to a voter record, checking eligibility based on the record, doing a signature match, and more. If all of those checks align just right, then the ballot is approved for counting. And there’s more: carefully separating the ballot from the envelope (no peeking allowed) and preparing the physical ballot for counting: flattening, sorting by precinct, and boxing up for the actual counting on Election Day.

MLB: That’s what they’ve been doing in PA for almost 4 days?

EJS: That, and counting. And that’s what county election staff in FL were doing for 22 days before the election, so that on Tuesday it was just the actual machine counting.

MLB. Ouch. And for how many ballots?

MLB: Is that a lot more than usual?

EJS: Roughly 10 times the number as in 2018, depending on how you count it. But to be fair, many PA counties had the opportunity to increase staffing and training — but not by 10x, not even close. So if you think about it, doing this job in only 5x the “normal” calendar time is pretty impressive.

MLB: Well … I guess so, now that you make it sound so boring. You mentioned a COVID factor?

EJS: Several. COVID has limited the ability to recruit workers and has required a bunch of health-and-safety changes to the ballot processing facilities and work process. Just think of all the hand sanitizer and PPE, and in places where it is required for observers to see the process.

MLB: Seriously. But, why didn’t somebody anticipate this and fix the “late start” so that I’m not spending days living off of Tums?

EJS: Well, the “somebody” would be the PA state legislature, which is who can make changes to PA election law, which for years has required that late start. The legislature did consider a bill to change that law to allow an earlier start, as part of response to COVID, which is of course the reason for such an increase in absentee voting.

MLB: You said “consider” — which means that they did not pass that bill?

MLB: Like, they thought it wouldn’t be this kind of chaos, or maybe that the chaos would be OK?

EJS: Well, charitably, it is not actually chaos that’s happening in the actual ballot counting. That’s going in a speedy and orderly manner as planned. The chaos is everybody else being King Julian in Madagascar, like “How Long Is This Going to TAKE?!” And also charitably at least some of the PA legislature weren’t fans of the idea of changing the absentee voting rules in such an important and pandemic effected election.

EJS: Well you know … there could be recounts and litigation, but the initial ballot counting is nearly done. The real finish in PA is Nov. 23 when the counties have to be finished so that the state can certify the election, triggering the start of the Electoral College process.

MLB: Certification? What’s that about?

EJS: Bottom line, it’s when you can pack in the Tums, and regardless of who the next President is, you can pull out the really good stuff to drink, and we can talk about something else.