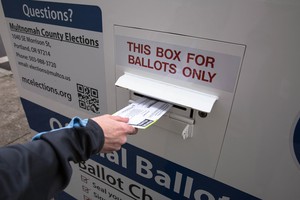 Yesterday the President declared a national emergency in the face of the rampant spread of COVID-19. Voters now face a conundrum as we all shift behaviors and absorb disruptions to daily life in order to slow the spread of COVID-19. Many cities, counties and even states in some cases are closing schools, compelling working from home (for those who can), and governments are discouraging congregating in public places. Meanwhile, as our remaining primary elections arrive, what alternative voting place is there other than a public place where people are in close quarters waiting in line, checking in, and using poll booths, where the risk of contracting COVID-19 is clearly more possible?

In short, if you want to vote, but are also being told to stay at home, how are you supposed to vote? The apparent obvious answer is to vote from home. However, it turns out that there is more to the idea than meets the eye, most importantly due to wide variations in each state’s political culture.

First let’s observe one practical challenge: timing. For next Tuesday’s voting states, it’s too late to conduct an all vote-at-home election. All of those states have weighed the risks. The majority has decided that in-person voting is not (currently) a high public health risk, and that modifications to voting place operations can mitigate public health risks. American Democracy must carry on.

Yet, we also already are seeing that some states may weigh risks differently. If it’s not safe for an employee to work in the office, then they should work from home. If it is not safe for a voter to vote in person, then the voter should vote from home—in other words, additional alternatives must be offered, so that voters are not forced to choose between voting and staying safe and healthy.

That should be obvious, right? Maybe, but different states handle this challenge differently.

To understand why, consider the state of Louisiana, the one of next Tuesday’s voting states that decided that the public health risks are too great, and has postponed its primary election. Many are suggesting that it is obvious that Louisiana should rapidly shift to conducting its primary election using the all-vote-by-mail methods that are common in some other states. But it’s not so obvious.

To understand why, consider the difference between the phrases “absentee voting” and “vote by mail.” If you live in one of the 34 states and District of Columbia that have chosen to make it possible for voters to choose to vote at home, the terms may seem pretty similar. But for the other 16 states, it is a big difference.

“Absentee voting” is what those states provide as an option for voters who are unable to show up on Election Day at a polling place to vote in person. A voter must file a request form asking for an absentee ballot. In some states, this form requires the voter to attest to a reason (or “excuse”) why the voter cannot vote in person. In those states, there is a strong tradition and culture of voting in person, and concern over potential abuses of voting outside of a controlled voting place.

As a result, it’s really not so helpful to tell the leaders of one of these 16 states that they should “simply shift” to “Vote by Mail.” For years (even decades) these states have consciously chosen a different path in exercising their state’s right to determine how elections are conducted in their own state. It’s important to respect that right, and the local decisions that go with it.

But at the same time, we have primary elections left to go, and more importantly, the November general election looming on the COVID-19 horizon, with no assurance that the public health emergency will be over by then. The choices that states make about their primaries will likely be precedent for what states choose to do for the November election—an important election, and one where the disruptions could be enormous—either because voters don’t vote due to illness or risk, or they vote in person and risk their health anyway.

I note here that our Legal Team explains that despite urban myths appearing in social media, there is no practical way that Congress could rewrite 3 USC §7 and gain the necessary 2/3rds approval in time to change the date from this coming November 3rd. And further, the President, despite apparently broad Article 2 powers could never successfully delay the election, though it could be tried. It just is not likely.

What is likely: figuring out how to safely conduct an election in the face of a national disaster or emergency.

So, with some imagination and respect for all states, there may be a reasonable middle path, what we might call “emergency vote at home” given the President’s declaration of this now being a “national emergency.” The key word is “emergency.”

The idea is that people would participate in a form of voting that at least in some states is less typical, and appropriate now only because of a public health emergency. You might also call it “expanded absentee voting,” respecting those states that require absentee voters to have a valid excuse to not go to the polls—but in a situation where everyone has the valid excuse of a declared emergency of public health, with recommendations against unsafe groupings of large numbers of people in close quarters.

The difference with true absentee voting is that for this “emergency” vote-at-home, the state would provide a temporary blanket excuse to everyone, waiving—for this election only—the requirement to fill out a form in advance requesting an absentee ballot.

Instead, everyone would receive a vote-at-home ballot, and voters could choose to use it or to vote in person if their state or county chooses to make that an option. But the point is that no one would have to choose between democracy and safety. Voters would have options.

That might be a reasonable principle, but even if you like it, it is one thing to say “emergency vote at home” and another thing to do it. In states that typically see high levels of voting in person and relatively few absentee voters, counties and parishes might be overwhelmed by a sudden—albeit temporary—shift to a deluge of voted-at-home ballots that have to be adjudicated for acceptability using the states existing rules (e.g., a hand ink signature match is required), and counted centrally with county facilities that were never intended for all-central-count.

Indeed, there will be real challenges, and some real costs. But fortunately, any state considering emergency expanded vote-at-home has real resources to draw upon in assessing or planning an executing such a sudden, temporary change in election practice. You can learn more about this in a companion article on the vote-by-mail model.

Let’s pause and remember that for the November general election, this is a national policy issue, and it needs to proceed with respect for each state’s history and practices and rights; and we hope would avoid of partisan bickering about whether this should’ve already been in place, or who has it right versus wrong. We need to keep our eye on the ball: preserving the constitutional mandate for operational continuity of our democracy as a matter of national security. That must be the bipartisan approach, because if such an initiative were to be implemented nationwide, the nation would need to look to federal funding and resource assistance for those states needing such.

The most relevant issue is whether states are able to choose to temporarily employ an alternative vote-by-mail option for this November, and then return to the state’s own typical operating procedures.  This national health emergency requires a suspension of touting benefits (i.e., participation, cost, ease, security) or risks (cost, fraud, voter confusion, security). States will continue to weigh these issues in their choices about how to conduct typical elections outside of national emergencies. And to be sure, all reasonable measures to ensure the common concern of security must be taken.

However, the most important issue before us is that the 2020 general election will not occur in a typical public health environment. Even if by a stroke of good fortune we’re seeing reasonable containment by the time we enter a new winter flu-season, the situation will still require minimizing exposure to high-risk infection settings. Thus, this will be an election conducted during a national health emergency. Therefore, temporary use of atypical measures will most likely be required for large numbers of voter to vote safely, without fear for health, and without concern that the COVID-19 pandemic could help create a botched election.

There is good news. States can make their choices of how to adapt, a national emergency vote-at-home solution could clearly make that possible, and our hardworking state and local election officials can gear up to carry out such temporary measures. However, government needs to move quickly, starting with a serious consideration and bipartisan support for an initiative such as what Senator Wyden proposed last week.

My belief is we all can respect each states’ rights, while simultaneously respecting every voters’ health, by focusing and quickly assessing a “Vote at Home” solution as an temporary approach to ensuring that American democracy and its constitutional mandate for operational continuity are sustained for our national election to be conducted under the presence of a national health emergency.