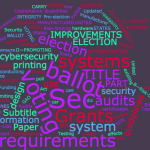 A week ago the Wall Street Journal ran an editorial that’s worth a comment in reply.  I can’t argue with the WSJ taking the view that the House SAFE Act (H.R.2722) is a “partisan maneuver” (possibly they’re referring to the very recently introduced Senate version: S.2238 SAFE Act, but I doubt it from the editorial). Given that even the Senate is now hyper-partisan, publications (like the Wall Street Journal) that want to find partisanship, will find it wherever they look.

However, let’s whittle this issue down to the essentials. Imagine stripping down the Bill— dropping the tree-hugging recycled paper thing; dropping the ranked choice voting; removing whatever other nit-picks the WSJ editors found. And imagine adding the 25% state “skin-in-the-game,” adding a ballot harvesting ban, and whatever else the WSJ editors would wish to be added.

Then, imagine just considering on its merits only two (2) basic essentials:

And while considering those two requirements, also consider whether it is right, fair, and practical for the Federal government to treat this as a funded mandate for every Federal election, with the Federal government providing the substantial majority (75%) of the funds that the state will need in order to comply with those two essential requirements, but using methods that each state decides on its own are the best for their local elections offices.

I would hope that the Wall Street Journal editors would find that to be a credible and well-guided opinion about the main point — the primary goals for any Federal legislation to strengthen the confidence in the integrity of our elections, when we know nation states will be working to undermine our confidence in meaningful elections.

If so, then I humbly offer a name for such a stripped down bipartisan version of SAFE that I invited readers to imagine: the KISS Act: Keep Integrity in Elections Simple and Secure. In other words, follow the engineer’s dictum to Keep It Simple, in order to get the job done with the simplest approach possible.