NYT reported on the continuing counting in some New York elections, with the control of the NY state house (and hence redistricting) hanging in the balance. The article is mostly apt, but the reference to “hanging chad” is not quite right. FL 2000’s hanging chad drama was mainly about the ridiculous extreme that FL went to in trying to regularize the hand re-counting rules for paper ballots, while each time a ballot was touched, the rule could change because the chad moved. 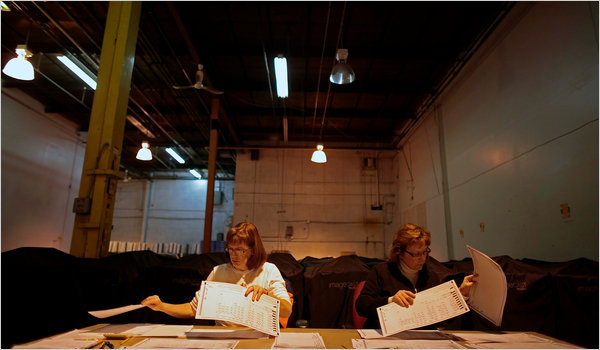 In this NY election, the problem is not a re-count, but a slow count; not problems with the paper ballots per se, but with the opscan counting system; and not a fundamental problem with the ballot counting method, but several problems arising from poll-worker and election officials’ unfamiliarity with the system, being used for the first time in this election. Best quote:

Reginald A. LaFayette, the Democratic chairman of the Board of Elections in Westchester, said older poll workers had trouble reading the vote tallies printed out by the machines. “You take the average age of an inspector, it’s maybe about 65, and so you put a new product out with them, and the change has been overwhelming to some of them,” he said.

It’s another example of the of situation I recently described in North Carolina. These voting systems were built for time-to-market, rather than designed, engineered, and tested for usability and reliability — much less designed for simplicity of the process of combining tallies into election results.

The recent experience in New York is nothing truly new – but rather an example of the usability issues manifested in an election organization that, unlike those elsewhere using similar voting system products, has not yet learned by experience how to use these quirky systems with greater speed and transparency than the first time around. Of course, it is a shame that this type learning-by-doing in real elections is necessary at all, to get to a reasonably transparent election process. But that’s what the vendors served up the market, and that’s what TTV is working to improve on.