I’ve had some time to decompress and reflect following our coverage of the 2018 midterm in support of NBC News.  Throughout the extended ballot counting that occurred in the midterm 2018 elections for several close races in Florida and Georgia, America experienced baseless claims of “fraud” and “infect 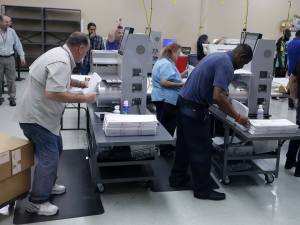 These remarks are doing incalculable harm to our democracy.

This sort of rhetoric ignores and exploits the very complexity of our electoral system for political gamesmanship, and it debases the tireless work of countless election officials.  Attacks like these must stop. Now. We’re all facing a rising challenge to restore trust in this cornerstone to administration of American democracy. And the 2020 election is now less than 690 days away.

I recently retired from the commercial voting technology industry, departing one of the three major vendors after almost 16 years of supporting elections in many states.  During that time, I had the privilege of working with county election officials, absentee ballot teams, and poll workers.  Together, we worked long hours in battleship-gray county buildings, chilly public libraries, and VFW halls whose paint had seen better days.

Anyone who has actually helped to run an election knows that recent allegations of “fraud” and claims that “ballots showed up out of nowhere” display a total ignorance or disregard for how elections actually work. 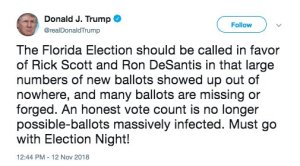 Do not believe the inflammatory language. What these allegations miss is that the simple principle of “one person, one vote” does not operate merely on Election Day, when many individuals cast in-person ballots at brick-and-mortar polling places.

Voting on Election Day is only the most visible example of casting a vote.  Every state in the Union also has diverse rules and methods to allow “absentee” ballots to be cast ahead of Election Day.  Another class of ballots are returned by U.S. citizens who are active members of the Uniformed Services, or who live overseas. Furthermore, the federal Help America Vote Act of 2002 created the class of provisional ballots, which are issued to voters whose eligibility to vote cannot be clearly determined at the time of voting (often due to problems with voter registration technology or electronic poll books, which are no fault of the voters).

The reason for this multilayered system of different voting types (absentee, early, in-person, overseas, provisional) is precisely to support the right of every eligible U.S. citizen to cast a vote, through a variety of methods.  Unfortunately, given reports of vulnerable voter service portals, disappearing registration records, and breakdowns in the voter check-in process, the 2018 midterms revealed that voters cannot simply assume that their Secretary of State has met the minimal obligation to protect the registrations of eligible voters.

Through no fault of their own, an increasing number of voters are being placed in the vulnerable position of having to defend their voter registrations, when they should have been unquestioned – which, in turn, leads to large numbers of “provisional” ballots that must be processed, if every eligible voter’s ballot is to be counted.  All of that takes time, and allegations that the investigation of all potential votes is a kind of “fraud” are simply gas-lighting.

Voters have reasons to be concerned about whether their votes are properly counted, and all is not well with America’s election infrastructure.  Far from it.  Across the country, the midterm 2018 elections demonstrated symptoms of a fragile system in need of serious overhaul: long lines, problems with voter check-in, antiquated voting technology, and many examples of overworked and overwhelmed election officials.

But infrastructure problems that desperately demand our national attention should not be confused with willful rigging of elections.

In my 15+ years of working with election officials, they all shared one critical trait: Whatever shortcomings existed in their operating environment; no matter how much they ran on a “shoestring” budget; and no matter how tired they felt late at night, the most important thing to every one of them was simply running free and fair elections.  Period.  That was more important than the outcome.  More important than the winners and the losers. What mattered was that everyone believed in the integrity of the results.

For the same reason, every American, regardless of political affiliation, beliefs or ideology, should be concerned about baseless attacks on the workings of our electoral system, because it’s an equal opportunity disease.

When no one believes in the outcomes of elections any longer, there’s nothing to stop both sides from weaponizing misinformation and sowing discord for the achievement of raw power.  We’re dangerously close to falling into that abyss, and we need to stop it now.

For the sake of our democracy, stop the demagoguery. If we’re going to fix our electoral system, we have to respect it first.

Edward Perez is the Global Director of Technology Development for the non-profit non-partisan OSET Institute. Prior to retirement from the commercial election technology world, Eddie spent 15 years working for a major  voting system vendor, including several years in product development and certification.